MANALAPAN, FLORIDA, January 24, 2020 — When our service men and women return from action, they often carry wounds the rest of us cannot see. Up to one in five veterans who served in Iraq and Afghanistan are diagnosed with Post-Traumatic Stress; and, sadly, more than 6,000 veterans die each year from suicide. When medicines and therapy fall short, trained service dogs can make a difference. 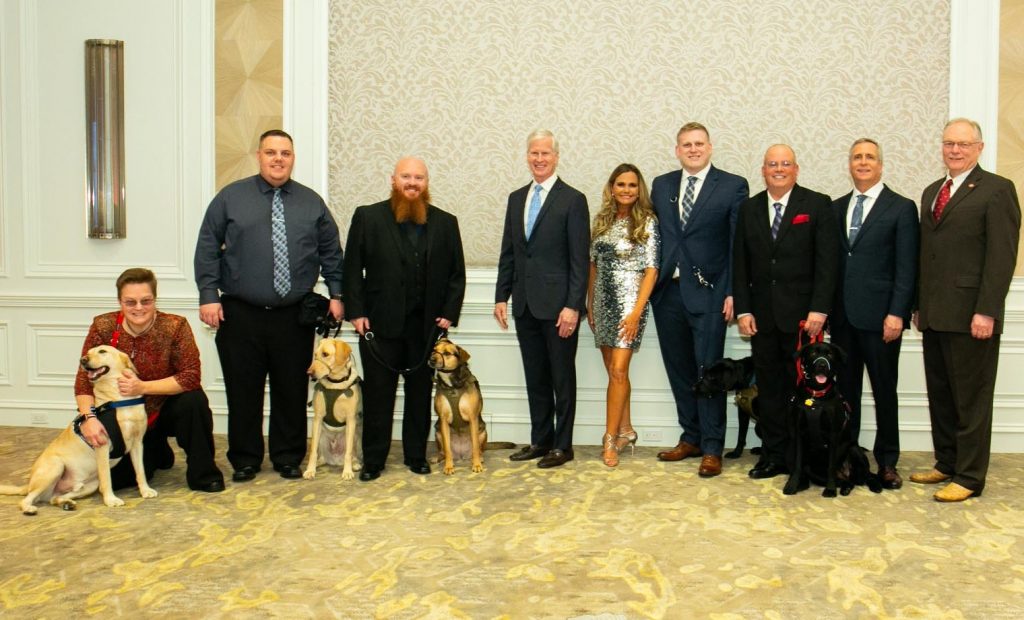 To help these veterans, American Humane was joined last night at Eau Palm in Manalapan, Florida by more than 300 people, including several generals, a rear admiral, 100 veterans and retired military warriors, and 200 veterans’ advocates including internationally renowned philanthropist Lois Pope in support of the organization’s “Pups4Patriots” program.

“There are many worthy causes in the world, but few inspire more people than working to help our nation’s brave veterans and our nation’s animals in need,” said American Humane President and CEO Dr. Robin Ganzert. “Tonight, with your help, and the support of some of the nation’s leading advocates for our military heroes and homeless animals, we will save more lives – on both ends of the leash.”

American Humane’s “Pups4Patriots” program identifies dogs in need of forever homes and trains them to be lifesaving service dogs free of charge for veterans with PTS and Traumatic Brain Injury– improving and often saving lives on either ends of each healing leash. The process of obtaining a PTS service dog can take between 18 and 24 months, and cost upward of $30,000. A cost that is out of reach for many veterans. With too few trained service dogs available for our service men and women in need, American Humane provides critically necessary training and service dogs to veterans in need.

“Nothing is more important than giving our veterans the weapons to win their private battles here at home,” said General Marks. “American Humane’s 104 years of experience in supporting our country’s service men, women and military animals gives them deep insights into how to better protect those who have spent a lifetime protecting us.”

“I am honored to be a small part of this remarkable organization that has a long history of seeing a need and taking solid action to make things right,” said Admiral Kearney, a board member of American Humane. “From the first animal rescues at the end of WWI, to today, American Humane has been dedicated to helping our veterans in need and is now devoting their time and efforts toward enabling the life-changing affects that these dogs can have on them.”

“Last year as I sat in this room, I was moved by the meaningful work that American Humane was doing through Pups4Patriots and knew that I didn’t just want to be a bystander,” said Mel Coleman, vice president of Coleman Natural Foods. “That’s why we pledged to fund the training for more than two dozen dogs over the next few years.” In addition to this pledge, Jeff Tripician, president of Perdue Premium Meat Company and Coleman Natural, donated his 2002 Silver C5 Convertible Corvette to be auctioned online. Interested bidders may visit www.AmericanHumane.org/Corvette.

VIP Supporters Turn Out for Veterans 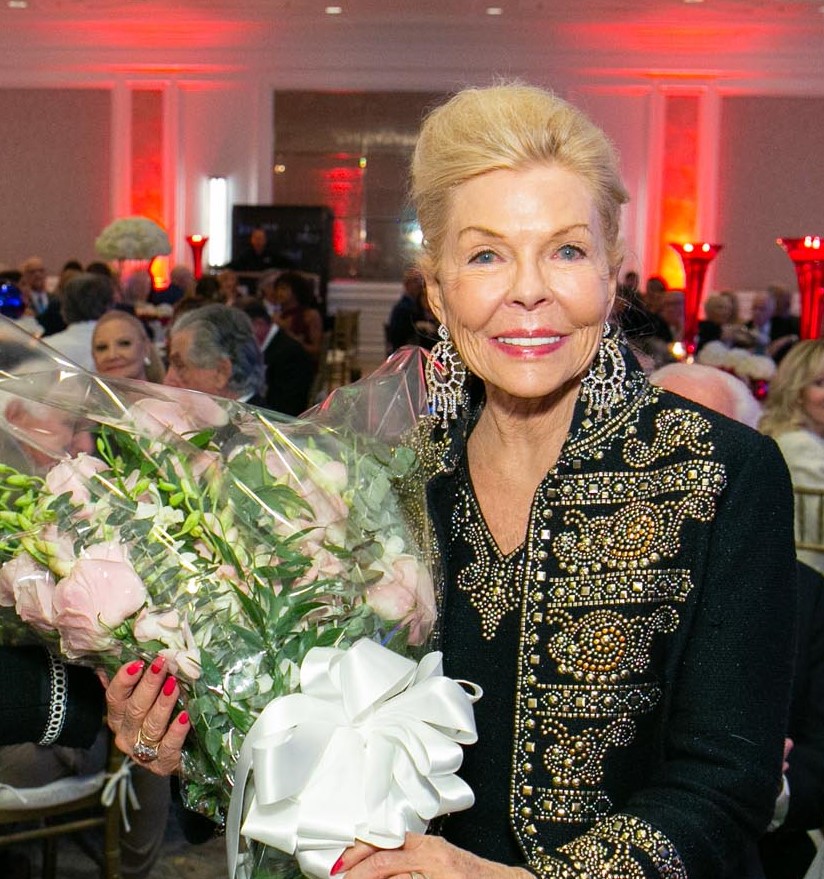 Responding to an emotional call to action, a number of generous individuals and companies pledged significant additional support to fund the training of specialized service dogs for veterans. Kevin Hubbard, co-founder of Rhoback Activewear, added to the company’s powerful past support with a gift of $50,000. Allison Bennett announced a pledge by Hallmark Channel of $60,000.  And Dr. J. Michael McFarland unveiled a pledge by leading animal healthcare company Zoetis of $120,000.

“On behalf of America’s veterans and the many wonderful animals who will find not just a forever home but a new mission in life, we thank all of you,” said Dr. Ganzert.  “Because of remarkable support like this, more than 125 healing leashes have already been put in the hands of our wounded warriors and many more will benefit.”

The emotional focus of the evening was, of course, the new Pups4Patriots graduates, who include:

Retired United States Army Sergeant Joseph served our country and found himself, like so many other brave warriors, in need of a helping hand. American Humane answered the call, and through their Pups4Patriots program, trained Nattie, a two-year-old female Shepherd mix as his highly specialized service dog. Sergeant Joseph said that before he met Nattie, his days and nights were filled with darkness, depression and anxiety. He felt as if he had no purpose and, as is very common, he avoided crowds and even going out, doing his grocery shopping at 2 or 3 in the morning on a weekend just so he could avoid people. Then he met Nattie. From day one, he says, they became best friends. Soon, he was able to go to public places without his anxiety becoming unmanageable. When Sgt. Joseph doesn’t feel good and shows that he needs assistance, Nattie picks up on it and will climb up in his lap or stand up and put her feet on his stomach…. Basically, just to let him know she’s there for him. And, of course, with her specialized training, she does so much more to help support her veteran and keep him on the path to healing. Joseph is sleeping better. Work has been more enjoyable. He now gets out and goes for walks around the neighborhood. As he puts it, “Nattie has basically saved my life. I still have some bad days, but thanks to American Humane, and Nattie, they’re not as bad. I feel as if I have a new purpose in life.”

Former U.S. Army Specialist Michael was paired with Murphy, a highly trained, two-year-old male Yellow Labrador Retriever. In just a few short weeks, the two bonded and became inseparable. Michael reports that “Murphy is changing my life one day at a time and I hope I can do the same for him. “My stress has dramatically decreased in public and my wife no longer pleads with me to venture out into the world. I could not be more grateful to everyone involved in this process. You have changed my life forever.”

Former United States Marine Corps Lance Corporal Alicia was coping with the invisible wounds of war and decided to apply for the program after losing her best friend to suicide. Through the Pups4Patriots program, American Humane was able to help train Gabriel, a wonderful, attentive Yellow Lab, to become a specialized service dog – one who changed Alicia’s life. Alicia says that Gabriel is now her partner through thick and thin. They go everywhere together and he makes tough things easier. Alicia reports that she can now enjoy life and at this point she has problems imagining life without him.

U.S. Air Force veteran Kris served our country as a Senior Airman, and through the Pups4Patriots program has now been paired with Andi, a one-year-old female lab/mastiff mix. Kris has said that he was talked into applying to the program by another veteran. Kris says he was nervous at first, but that getting a service dog was the best thing he ever did in his life. Andi has been a Godsend and is a perfect fit for him. The bonding he felt with Andi was immediate and within days was alerting him when a problem was coming on. Kris has been able to get out and enjoy life with Andi, and he reports that she has even helped changed his sleeping habits and on to a healthier, happier life.

Former U.S. Army Specialist Matthew had previously done research on the effectiveness of service dogs and felt that he would be a good candidate to benefit from this four-legged medicine. Even so, he was nervous when he first met Simba, a one-year-old black Lab and Mastiff mix, as he had heard Simba was very particular about who he bonded with. Fortunately, American Humane had picked the right combination of veteran and dog, and something immediately “clicked” when the two met. As Matthew described it, it was one of those “this one’s the one” moments. Simba came right up to Matthew, sat in front of him, and looked at him as if they’d known each other forever. Matthew and Simba are inseparable now. They work as if they have been together for a lifetime, and Matthew has already seen improvements in his symptoms and his life.

American Humane, the country’s first national humane organization, has been working with the U.S. military for more than 100 years, when they rescued and cared for 68,000 war horses wounded each month on the battlefields of World War I Europe. Through their Lois Pope LIFE Center for Military Affairs, the nonprofit organization now work to provide service dogs for veterans with PTS and TBI, helps arrange for free healthcare for our four-footed warriors, and repatriate and reunite retired war dogs with their former handlers. For more information, visit www.americanhumane.org, call 866-242-1877 and follow them at Facebook and Twitter. 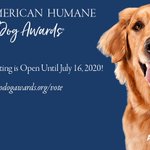